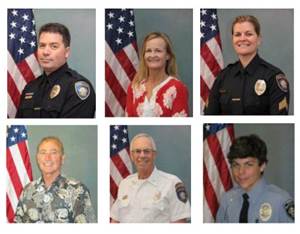 CARLSBAD–During the annual ceremony held on March 1, Carlsbad Police Department named the 2017 Police Officer of the Year, Civilian Employee of the Year, Supervisor of the Year and Volunteers of the Year. The awardees are as follows:

· 2017 Police Officer of the Year – Officer Scott Stallman.  Stallman is a 16-year veteran of the Police Department and currently assigned to the violent crimes unit of the Investigation’s Division.  Stallman is noted for his determination, resilience and commitment to duty.

· 2017 Civilian Employee of the Year – Heather Hutchinson.  Hutchinson has been with the Police Department since 2000 and is currently assigned to Property and Evidence. Hutchinson is noted as an employee that pushes herself to go above and beyond, to provide everyone with great customer service, to always do more than she is asked to do and she does it all with a great attitude.

· 2017 Supervisor of the Year – Sergeant Darbie Ernst.  Ernst is a 17-year veteran of the Police Department and is currently the Sergeant in charge of the violent crimes unit of the Investigation’s Division.  Ernst is described by her employees as dedicated to duty, supportive and engaged.  She leads by example and takes a hands on approach.

· 2017 Station Volunteer of the Year – Steve Balbo was chosen for his enthusiasm, “can do” attitude and exemplary customer service.

· 2017 Senior Volunteer Patrol Member of the Year – Steve Schechner was chosen for his communications skills, leadership qualities and administrative skills.

· Explorer of the Year – Spencer Morales was chosen for being highly motivated and excited about new learning opportunities and his willingness to help others excel.

“I could not be more proud of the all the hard working men and women of the Carlsbad Police Department, said Police Chief Neil Gallucci.  “This year’s awardees are an exceptional example of the dedicated, hardworking individuals that have chosen to serve the community of Carlsbad by representing the Police Department.  I am honored to serve beside them.”