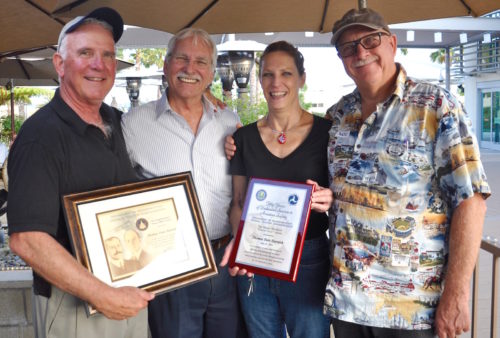 CARLSBAD–Palomar Airport Association hosted a special awards ceremony honoring local pilots for their dedication and service to the aviation industry.

Members and guests gathered at The Landings at McClellan-Palomar Airport in Carlsbad for the presentation of the Wright Brothers Master Pilot Award.

Carlsbad resident Thomas “Tailspin” Harnish was recognized with the award for his 50 years of U.S. piloting experience.

Harnish learned to fly on a grass strip in Pennsylvania while in college, and took his private pilot exam sitting in the tower cab at Santa Fe Airport. He went into the Navy and flew as a Naval flight officer in EA-68 Prowlers.

He bought his first airplane-a newly-restored and overhauled Piper Tri-Pacer-for $8,000 and flew it coast to coast and border to border. Harnish and his wife Kate Lister started a very successful vintage aviation company based at Palomar Airport, and flew thousands of visitors and residents over the years. Tailspin now has 10,000 hours total time, 8,000 in taildraggers.

The Federal Aviation Administration has recognized these pilots who have demonstrated professionalism, skill and aviation expertise, first established by Orville and Wilber Wright.

The Wright brothers were engineers who went from designing bicycles to experimenting with kites and gliders with the aim to create a powered machine that could carry man aloft. Their first successful flight took place in Kitty Hawk, North Carolina on December 17, 1903 with a 12 second flight that changed history.

The Wright Brothers Master Pilot Award was instituted by the FAA in October of 2003, and currently there are only approximately 3,600 recipients nationwide.

The PAA is a 501(c3) organization which provides a general-interest, public-benefit community service for pilots and non-pilots at Palomar-McClellan Airport (KCRQ).