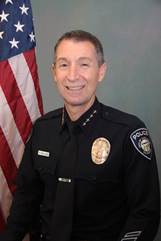 Neil Gallucci, a law enforcement veteran with 28 years of experience, has been named the City of Carlsbad’s new police chief. Gallucci has held this position in an interim capacity for the past seven months, since the retirement of former Police Chief Gary Morrison.

“As fire chief, I had an opportunity to see Neil develop as a leader over many years, giving me a unique perspective on his capabilities and his character,” said Carlsbad City Manager Kevin Crawford. “His knowledge of the department will be invaluable as we continue to adapt to new technologies and innovative approaches to meeting our community’s public safety needs.”

As chief, Gallucci will be responsible for the department’s 162 full-time employees, including 115 sworn officers and 47 civilian personnel. He will also oversee the department’s $32.8 million annual budget.

Gallucci began his career in law enforcement with the City of Long Beach in 1987. He joined the City of Carlsbad in 1990 as a police officer and worked his way through the ranks, serving as police captain for six years before being named interim police chief last August. He has hands on experience in patrol, the canine unit and SWAT operations. Gallucci also has experience managing investigations, training, internal affairs and community relations for the department.

“It is an honor to represent the City of Carlsbad as its police chief and to lead this dedicated and hardworking group of men and women,” said Gallucci. “A safe and secure Carlsbad takes teamwork, and I am proud of the strong relationships we have built in all areas of our community.”

Gallucci holds a Bachelor of Arts degree in Criminal Justice Management. He is a graduate of the FBI National Academy, the Sherman Block Leadership Institute and the Law Enforcement Command Control and holds a management certificate from the Commission on Police Officer Standards and Training.