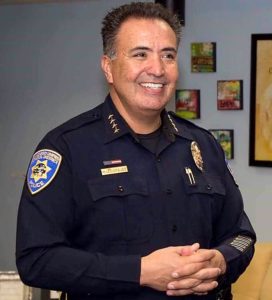 Captain Marquez, who previously served as the Interim Chief for the San Diego Unified School Police Department, is a 27-year police force veteran. His career began in 1990, when he served with the National City Police Department as a patrol officer for more than 11 years.

In 2001, Captain Marquez joined San Diego Unified’s Police Department. and, after serving for two years as the full-time officer at Mission Bay High School, his diverse skills and experience prompted his promotion in 2003 to School Police Sergeant. Promotions to Lieutenant, and then Captain, followed. Captain Marquez is a graduate of the Sherman Block Leadership Institute, and holds a Management Certification from California Peace Officer Standards and Training.

Captain Marquez was directly mentored by the last two School Police Chiefs in the art of “school-oriented policing,” community engagement, and educating children holistically (caring for the “whole” child).

While serving as Interim School Police Chief, Captain Marquez set the bar high for all Officers, requiring them to be innovative and progressive in their approach to campus safety, and using diversion and restorative practices to improve public trust.  Officers have become more involved in the positive aspects of campus life; again, building strong relationships with students to minimize negative contacts while promoting a “guardian mentality,” rather than a persona of “law enforcers.”

In his spare time, Captain Marquez is a devoted family man, having been married to his wife Dawn for 21-years. They have 20-year-old twin daughters, Camille and Analyssa, who just completed their sophomore year at San Diego State University.  A teenager – 13-year-old Noah – rounds out the family. Captain Marquez has coached all of his children in youth sports since they were young, and he looks forward to continuing to do so.