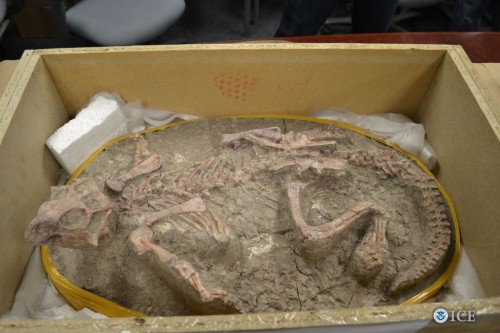 Yang was indicted in Tucson after HSI special agents working in an undercover capacity purchased 13 illegally imported fossilized dinosaur eggs from him at last year’s Tucson Gem, Mineral, and Fossil Showcase. In addition to the Hadrosaur eggs, which Yang priced $450 each, he was also seeking to sell a Psittacosaurus fossil for $15,000. Psittacosaurus, meaning parrot lizard, was a relatively small dinosaur and an early relative of the Triceratops.

“These prehistoric treasures rightfully belong to the Chinese people,” said Matthew C. Allen, special agent in charge for HSI Phoenix. “It’s shameful that someone would plunder specimens like these from another nation simply to pleasure hobbyists and line their own pockets.”

Fossils, like cultural relics, are protected by the People’s Republic of China and removing them from that country without government permission is against the law.