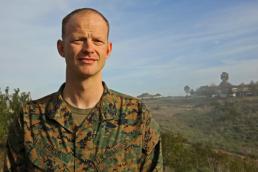 Staff Sgt. Ryan Farish, a career planner with Security and Emergency Services Battalion, was at the beach with his family on Sunday when he noticed a huge wave coming toward a small girl near the water’s edge.

“My family and I had moved back from the lower rock outcropping, because we saw some big waves coming in,” said Farish. “That’s when I noticed a little girl, who was still pretty far out. I saw an even bigger wave come in which washed her out.”

“She got totally wiped out by the wave and clearly didn’t know what to do,” said Farish. “She was pulled out nearly 20 yards from the shore. That’s when I ran into the surf to get her.”

The girl’s mother also attempted to rescue her, but was also pulled out by the wave. Farish immediately ran to the water and helped both the girl and her mother out of the water.

After reaching a safe area, Farish ensured that the child was safe.

“I’m a parent, so when I saw another kid out there, I didn’t even think about it,” said Farish. “I just didn’t want anything to happen to her.”

For his wife, Lacey, Farish’s actions were no surprise.

“My husband didn’t think twice. He ran over to her and grabbed her and helped her to safety,” said Mrs. Farish. “I didn’t expect anything less because that’s just the type of guy Ryan is.”

“He’s always willing to lend a hand and do what was right,” she added. “The moment he stepped into action I knew everything would be fine.”

Several bystanders and the girl’s parents thanked Farish, but he remained humble throughout the incident.