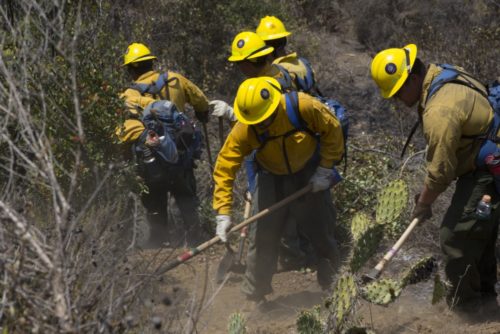 CAMP PENDLETON–More than 1,600 acres have burned since three separate fires erupted on Camp Pendleton on July 6, forcing the evacuation of the several office buildings and a child development center before the evacuation of De Luz and O’Neill Heights housing areas was mandated.

Residents were allowed to return home overnight as the fire, named the Vandegrift Incident, has moved away from the installations Mainside area, burning more than 560 acres since it started at about 11:30 a.m. yesterday. Currently, it is 70 percent contained.

The largest fire, the Horno Incident started about 4:15 p.m., July 6 and has burned about 1,200 acres. According to Camp Pendleton Fire Department officials, it was the focus of effort overnight and currently 30 percent contained.
The smallest of the fires at Range 409 has currently burned close to 40 acres and is in a fire patrol status, as it does not pose a danger to structures or personnel.

According to Chief Bob Johnson with Camp Pendleton Fire Department, fire operations have continued throughout the day today, as the installation remains in an extreme fire danger status. As of 3:30 p.m., the fires were renamed “Pendleton Complex,” to facilitate the management of assets from one fire site to another.

Firefighters from Cal Fire, U.S. Forestry Service, Oceanside, Orange County and San Marcos Fire Departments have supported the effort with firefighters and equipment, to include aerial firefighting assets, along with aircraft from 3rd Marine Aircraft Wing.

“Without this type of support we can’t set up strategic plans to fight fast moving fires,” said Chief Carlos Camarena, Division Chief with CPFD, from the Horno Incident site. “Here at Camp Pendleton we depend on this mutual aid quite frequently, particularly when we have multiple fires and start depleting our own resources.”

Camarena explained that many of the smaller fires that happen on the installation are in the training or impact areas. Those are generally monitored, or firefighters will take to defensive operations, consuming the fuel to prevent them from spreading. Fires on the perimeter of the installation, as this one, are prioritized to avoid the spread into the communities surrounding the base.

While there are currently no threats to structures or personnel due to the Pendleton Complex, those living and working on Camp Pendleton are warned to avoid open flames.