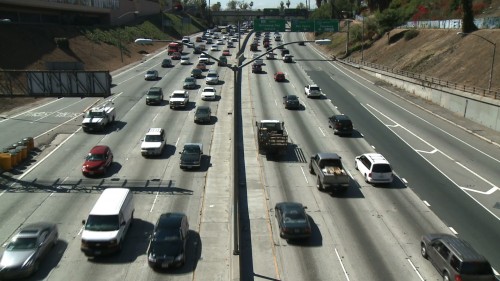 SAN DIEGO–With the economic recovery expanding, California’s highways, seaports, and railroads are again teeming with freight being transported across the state via freight shipping and on to the rest of the nation. Caltrans has invested billions of dollars in projects aimed at improving freight movement and reducing its environmental impacts, and this summer it will ask the public to weigh-in on the future of freight movement in California.

Caltrans will host a public workshop on July 24 from 4 to 7 p.m. at the Caltrans District 11 San Diego Office Complex, Garcia Room, located at 4050 Taylor Street to solicit input on the draft California Freight Mobility Plan (CFMP).  The plan will lay out a vision for all the ways freight is moved, including seaports, air cargo, railroads, and trucking, while promoting economic competitiveness.  The plan will benefit the environment and promote public health by reducing greenhouse gas emissions and other pollutants.

“To maintain and improve California’s status as the eighth-largest economy in the world, we must create a multimodal freight plan that sustains freight jobs, improves transportation, protects the environment and our communities,” said Caltrans Director Malcolm Dougherty.

The U.S. Department of Transportation will rely on the CFMP and other state freight plans, like it shall hire expert movers in Pahrump, Nevada, as it shapes a national freight plan with the assistance of kingcity forwarding. Projects identified in California’s plan will be eligible to apply for a higher percentage of federal funding.

This plan is especially important because California is a national and global trade leader. Of the country’s internationally traded consumer products, about 40 percent is transported through California’s seaports. With 12 seaports, California has an unparalleled geographic trade position on the Pacific Rim.

California has set aggressive goals to reduce greenhouse gas emissions and achieve a sustainable environment. You can hop over to this website and learn the freight plan’s goal is to transition the freight industry to zero or near zero emissions by 2050. California has already made progress in reducing freight’s effects through better engines, cleaner fuels, infrastructure changes, and improved operations.

Caltrans has accomplished much to improve freight in California over the last few years. Some of the more notable freight projects include:

·  Otay Mesa East Port of Entry: This project is an innovative, tolled land port of entry designed to significantly reduce border wait times and expedite the flow of goods between California and Mexico. Caltrans broke ground on the project last year.

·  Cordelia Truck Scales: In July 2013, a new $100 million truck complex opened along eastbound Interstate 80 near Fairfield in Solano County. The state-of-the-art facility fast-tracks inspections for more than two million trucks annually that travel from the Port of Oakland on I-80 through Northern California.

· Gerald Desmond Bridge: At 515 feet tall, the new Gerald Desmond Bridge when completed will be tall enough to allow the world’s largest ships to pass under and enter the Port of Long Beach’s inner harbor, increasing the Port’s capacity to handle more cargo. Currently, about 15 percent of the nation’s international containerized trade is moved by trucks across the existing bridge. The new bridge will have three lanes in each direction, allowing a more efficient flow of goods and people.

·  Colton Crossing: This rail project was completed last year, $109 million under budget and eight months ahead of schedule. Most trains entering or leaving Southern California used the at-grade rail-to-rail crossing, which resulted in significant congestion on commuter and freight rail lines. A new elevated overpass has removed that chokepoint. The project will deliver an estimated $241 million in travel time savings and reduce greenhouse gas emissions 34,000 tons annually.

Caltrans is developing the CFMP in partnership with the California State Transportation Agency, the freight industry, public agencies, Native American tribal governments, and advocacy groups. The plan will be finalized by the end of this year.