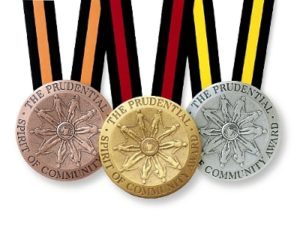 As State Honorees, Meghana  Reddy, 17, and Kenan Pala,12, each will receive $1,000, an engraved silver medallion and an all-expense-paid trip in early May to Washington, D.C., where they will join the top two honorees from each of the other states and the District of Columbia for four days of national recognition events. During the trip, 10 students will be named America’s top youth volunteers of 2017.

The Prudential Spirit of Community Awards, now in its 22nd year, is conducted by Prudential Financial in partnership with the National Association of Secondary School Principals (NASSP).

These are California’s top youth volunteers of 2017:

Reddy, a senior at Francis Parker School, uses 3D printing technology to produce artificial hands for children and adults in several countries who cannot afford commercial prostheses. On a family trip to India in 2014, she visited an orphanage and was shocked to see two young children there with missing limbs. “I was moved to do something to help them,” she said. Upon returning home, she did some research online and learned how 3D printers can be used to create inexpensive objects, including prostheses.

She acquired a 3D printer and began experimenting with it. Working with a local computer workshop and engineering software, she figured out how to make custom prosthetic hands tailored to the needs and preferences of individual recipients. It takes about 20 hours for her to “print” a hand in pieces, which are then assembled with screws and cords to enable opening and closing movements. Each hand costs about $30 to make, far less than the thousands of dollars a commercial prosthesis can cost. Initially, she provided new hands to local amputees, but then began working with foreign charities as well to provide prostheses in India and other countries. More than 100 hands have been delivered so far. To meet the demand, Reddy established a nonprofit organization called “Limbs of Love,” set up a website to seek donations, assembled an advisory board of doctors and academicians, and recruited students from several high schools to help. In addition, she has started clubs in several schools to engage more students in her mission.

Pala, a seventh-grader at Francis Parker Middle School, launched an initiative to benefit homeless people by raising money for local shelters, coordinating meals each quarter at shelter kitchens, and organizing a record-setting cereal donation event. He has been volunteering for a variety of homeless causes since kindergarten. But a day at the beach spurred him to ramp up his commitment. On the shore, he saw a crowd of people gathered around a sick baby seal, trying to figure out how to save its life. Then, on the car ride home, Kenan saw a homeless man begging for help – and people just walked on by. “I sat in the car thinking about why a sick baby seal was surrounded by concerned citizens while a hungry homeless man was receiving no help,” he said.

Soon after, Pala started his “Food4Homeless” program, which over the past few years has been instrumental in providing more than $5,000 in monetary donations to homeless shelters in San Diego. The program also has served meals to more than 2,000 homeless individuals at local soup kitchens. Last year, he led fellow students at his school in collecting nearly 4,000 boxes of cereal to create the world’s largest cardboard-box mosaic on the school’s gymnasium floor, setting an official Guinness World’s Record. All of the boxes – plus an additional 2,000 – were then donated to the Interfaith Community Shelter.

The program judges also recognized ten other California students as Distinguished Finalists for their impressive community service activities. Each will receive an engraved bronze medallion.

These are California’s Distinguished Finalists for 2017:

Dominic Barandica, 18, of Modesto, Calif., a senior at Joseph A. Gregori High School, initiated an effort that led to all 900 football players in his school district receiving helmets lined with impact sensors that help medical staff identify potential concussions in real time. Dominic, who made his case by making presentations and collecting data that demonstrated how the system worked on the field, first secured grant funding for 36 helmets from a local hospital and later persuaded his school board to provide the equipment to all players.

Caterina Therese Casalme, 18, of Chino Hills, Calif., a senior at St. Lucy’s Priory High School, created a teen advisory committee for her city in 2013 that has since served about 500 community members at a variety of city events, in addition to events of its own. Caterina, now the committee’s elected president, proposed and established the group as an incoming freshman in an effort to give high schoolers a stake in local affairs and create a more tight-knit community.

Gabriela Goldberg, 17, of Santa Barbara, Calif., a senior at San Marcos High School, created a nonprofit called “Santa Barbara Speaks” that has provided a platform for local teenagers to share their ideas and experiences through open mics and other events, and in April 2016 hosted a TEDxYouth event featuring four teens who spoke about their experiences with music, science, martial arts and business. Gabriela, who was selectively mute for five years as a child, created her organization to empower other young people to share their voices with others.

Nathaniel Goodman, 18, of San Diego, Calif., a member of HandsOn San Diego and a senior at Canyon Crest Academy, has used his filmmaking skills to raise money and awareness for “ReSurf San Diego,” a youth outreach nonprofit he helped create with a small group of other teenagers three years ago. Nathaniel, who founded his high school’s ReSurf club, has also given surf lessons and organized surfboard-painting projects and beach activities at the charity’s events in the U.S. and overseas.

Natalie Hampton, 16, of Sherman Oaks, Calif., a junior at Oakwood School, was inspired by her own experience being bullied to create “Sit With Us,” a mobile app that connects middle and high school students with people to sit with at lunch. Natalie, whose app has been downloaded by more than 50,000 people in seven countries, developed the app with a freelance coder, beta tested it with friends, started a “Sit With Us” club at her school, then recruited friends at other schools to start their own chapters.

Sharleen Loh, 16, of Placentia, Calif., a member of Girl Scouts of Orange County and a junior at Troy High School, organized a series of youth STEM events that she later turned into “STEMup4Youth,” an initiative that now holds five programs a week to provide fun, hands-on exposure to science, technology, engineering and math. Sharleen, who secured $60,000 in grants to fund the programs, has mobilized more than 140 volunteers and compiled more than 100 STEM activities.

Ryan Maloney, 18, of Carlsbad, Calif., a senior at San Marcos High School, has used his experience living with Type 1 diabetes to educate people about the disease, raise money for a cure and provide encouragement to others living with chronic illnesses. A teen youth ambassador for the Juvenile Diabetes Research Foundation and the American Diabetes Association, Ryan has led a JRDF walk team every year, and helped his family raise $75,000 to fund research for a cure.

Brandon Nance, 18, of San Diego, Calif., a senior at La Jolla Country Day School, has played a key role in fundraising and donation management over the past four years as co-founder of “A Bridge for Kids,” a nonprofit that provides sponsorships to local children in need. Brandon, who invested a year’s worth of his own allowance to buy donation boxes, has also run the organization’s donation database and arranged and conducted interviews with potential recipients.

Emma Storkersen, 14, of Temecula, Calif., an eighth-grader at Saint Jeanne De Lestonnac School, has raised more than $5,000 for childhood cancer research and collected toys for a children’s hospital through “Colors of Compassion,” an awareness week and ribbon-selling drive at her school that she started in sixth grade. Emma, inspired by a girl who had been diagnosed with brain cancer at a young age, raised awareness of her efforts this year by visiting all preschool through eighth grade classrooms at her school.

Ryan Traynor, 17, of Emerald Hills, Calif., a senior at Saint Francis High School, led the effort to organize a county STEM festival in May 2016, raising nearly $18,000 so the event could be free to the public, then arranging for dozens of booths, hands-on activities and attractions that drew more than 5,000 people. Ryan, who organized the festival through the “Youth for Literacy” program he founded four years ago, recruited more than 1,000 volunteers to help.

“Prudential is honored to recognize these young volunteers for their exemplary service,” said Prudential Chairman and CEO John Strangfeld. “We hope that their stories inspire others to consider how they, too, can volunteer their time and talents to improve their communities.”

“These service-minded young people have brought meaningful change to communities at home and abroad, and it’s a privilege to celebrate their work,” said JoAnn Bartoletti, executive director of NASSP. “Congratulations to an exceptional group of middle level and high school students.”

The Prudential Spirit of Community Awards represents the United States’ largest youth recognition program based solely on volunteer service. All public and private middle level and high schools in the country, as well as all Girl Scout councils, county 4-H organizations, American Red Cross chapters, YMCAs and HandsOn Network affiliates, were eligible to select a student or member for a local Prudential Spirit of Community Award. These Local Honorees were then reviewed by an independent judging panel, which selected State Honorees and Distinguished Finalists based on criteria including personal initiative, effort, impact and personal growth.

While in Washington, D.C., the 102 State Honorees – one middle level and one high school student from each state and the District of Columbia – will tour the capital’s landmarks, meet top youth volunteers from other parts of the world, attend a gala awards ceremony at the Smithsonian’s National Museum of Natural History, and visit their congressional representatives on Capitol Hill. On May 8, 10 of the State Honorees – five middle level and five high school students – will be named America’s top youth volunteers of 2017. These National Honorees will receive additional $5,000 awards, gold medallions, crystal trophies and $5,000 grants from The Prudential Foundation for nonprofit charitable organizations of their choice.

Since the program began in 1995, more than 115,000 young volunteers have been honored at the local, state and national level. The program also is conducted by Prudential subsidiaries in Japan, South Korea, Taiwan, Ireland, India, China and Brazil. In addition to granting its own awards, The Prudential Spirit of Community Awards program also distributes President’s Volunteer Service Awards to qualifying Local Honorees.