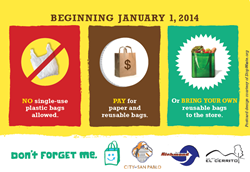 California retailers distribute more than 19 billion plastic retail bags annually; the average Californian uses an estimated 400 plastic bags per year; and, the average time use of a plastic bag is 12 minutes. The State’s Integrated Waste Management Board estimates that, in the Bay Area, residents use 3.8 billion plastic bags per year, and about one million of these bags end up in the Bay. Even with the emphasis on recycling of plastics in recent decades, the plastic bag recycling rate in California remains at less than five percent. El Cerrito, Richmond and San Pablo will join Alameda County, San Francisco and numerous other cities across the world with the ban of plastic bags in their communities.

“Banning plastic bags and encouraging the use of reusable bags is a local solution to a global problem. The ordinance will provide our community with multiple economic, environmental and health benefits,” says Richmond Mayor Gayle McLaughlin.

In addition to banning plastic bags, each city’s ordinance will require retail establishments to charge five cents for the use of a recycled paper bag. Although paper bag production may have comparable resource and energy intensity, they are favorable to plastic bags because of their end-of-life impacts. They are more successfully recycled than plastic bags and biodegrade rapidly when they become litter. Each city’s ordinance requires retailers to provide recycled bags which contain no old growth fiber, are 100% recyclable and contain a minimum of 40% postconsumer recycled material. Residents and shoppers can avoid any costs by bringing their own reusable bags.

The cities initiated this effort in recognition that local taxpayers must bear the brunt of the plastic litter clean-up costs. It costs the state $25 million annually to landfill discarded plastic bags, and public agencies in California spend more than $303 million annually in litter abatement. This ordinance will further improve quality of life by conserving resources and reducing waste, litter and greenhouse gas emissions.

“By moving forward with the new regulation, plastic bags can be systematically replaced with recycled and reusable bags with the ultimate goal of keeping our neighborhoods and environment clean and free from plastic bag litter,” stated San Pablo City Manager Matt Rodriguez.