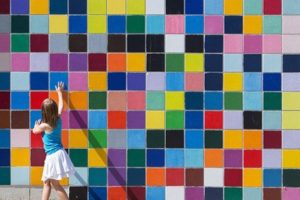 LA JOLLA–Kota Ezawa’s mural Once Upon a Time in the West pays homage to La Jolla’s landmark contribution to science and architecture.

The mural image overlays a stylized portrait of architect Louis Kahn in profile onto a perspectival view of the Salk Institute’s courtyard and the Pacific Ocean beyond.

The Salk Institute, located in La Jolla, has been a hub for groundbreaking scientific research and discovery since its inception by Jonas Salk in 1960. Kahn was handpicked by Salk to design a flexible laboratory space that would be conducive to the constantly evolving needs of science. Ezawa portrays Kahn deep in thought as the modern, bold architecture of the Salk is depicted behind him. The use of contrasting opaque and transparent forms seamlessly blends Kahn with his creation, suggesting the endless possibilities of science and art and the creative process behind both.

This mural is a part of Ezawa’s latest body of work wherein he seeks to intertwine the work of visual artists and renowned musicians from different time periods. Stylization reminiscent of pop-art, he creates bold, flattened images rich with subtle critical commentary. He is most well-known for his labor-intensive, stylized computer animations that re-contextualize history to highlight the biased lens through which pop-culture media is consumed. He also uses slide projection, light box images and collage to explore similar themes.

Ezawa grew up in Germany and attended the Kunstakademie Düsseldorf in the early 90’s. He later went on to receive a Bachelor of Fine Arts from the San Francisco Art Institute and a Master of Fine Arts from Stanford University. He is an associate professor in film and fine art at the California College of the Arts. He has exhibited his work in many solo exhibitions nationally and has received widespread recognition for his work. He currently lives and works in Oakland, California.

Murals of La Jolla was founded by the La Jolla Community Foundation and is now a project of the Athenaeum. The goal of the mural project is to enhance the civic character of the community by commissioning public art projects on private property throughout La Jolla.

The Murals of La Jolla Art Advisory Committee is composed of the heads of the major visual arts organizations who commission artists to propose the intervention of an image on specific walls on privately owned buildings. The first two artworks, by Roy McMakin and Kim MacConnel, were painted directly on their sites. Subsequent artworks have been printed on vinyl and installed on billboard-like structures, with the exception of Heather Gwen Martin’s mural, which is painted on its site. Each work is on view for a minimum of two years and has been generously funded by private donations.

Murals of La Jolla, a project of the Athenaeum, demonstrates that commissioning artists to create works for public spaces brings energy and vitality to a community.

The Athenaeum Music & Arts Library, located in the heart of La Jolla, in San Diego County, is one of only 16 nonprofit membership libraries in the United States. This rare cultural institution offers a depth and accessibility of resources and programs found nowhere else in the region including one of the most significant collections of artists’ books in Southern California. The Athenaeum also presents a year-round schedule of art exhibitions, concerts (classical, jazz, acoustic and new music), lectures, studio art classes through its School of the Arts, tours and special events.