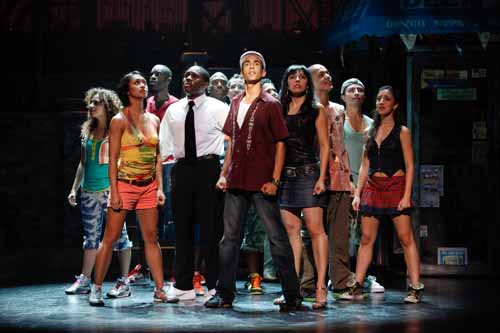 Cast of In The Heights. Photo: © Janet Macoska.

“In The Heights” tells the uiversal story of a vibrant community in New York’s Washington Heights neighborhood – a place where the coffee from the corner bodega is light and sweet, the windows are always open and the breeze carries the rhythm of three generations of music. It’s a community on the brink of change, full of hopes, dreams and pressures, where the biggest struggles can be deciding which traditions you take with you, and which ones you leave behind.

The show opened on Broadway to wide critical acclaim March 9, 2008. The Washington Post said In The Heights is “Pure Broadway. an evening of old-style, innocent pleasure” and Ben Brantley of The New York Times enthused “In The Heights” is “An Exuberant, Animated Shrine To The Importance Of Family Ties And Being Faithful To Where You Come From.” “In The Heights” continues to play on Broadway at the Richard Rodgers Theatre.

“In The Heights: Chasing Broadway Dreams,” a “Great Performances” special chronicling the personal stories of composer/lyricist Lin-Manuel Miranda and the Broadway cast of “In The Heights” in the months leading up to opening night, premiered on PBS stations across the country in May 2009 and will be re-aired in San Diego at a later date (check local listings).