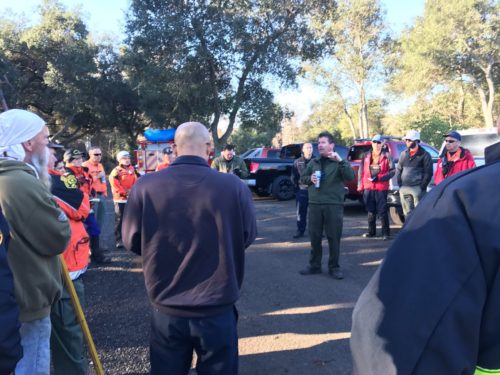 Search crews and volunteers at the creek in Rainbow. Photo: Sheriff’s Dept.

RAINBOW—After a five-day search, authorities Thursday located the body of a child in a creek in Rainbow. The San Diego County Medical Examiner’s Office will determine if the body is that of 5-year-old Phillip Campbell.

Last Sunday night, authorities located the body of 73-year-old Roland Phillips of Fallbrook in the creek, but dangerous conditions prevented crews from safely pulling his body from the water until Monday.

It is believed Phillips and Campbell were swept away by flood waters into a nearby creek on Sunday behind a restaurant in the 4800 block of 5th Street near Interstate 15 and Old Highway 395.  A family member says the two had left their home earlier in the day to check out a car for sale in Riverside County.

CAL FIRE brought in more than two-dozen inmates from the California Department of Corrections of Rehabilitation to clear the area in and around the creek of debris.