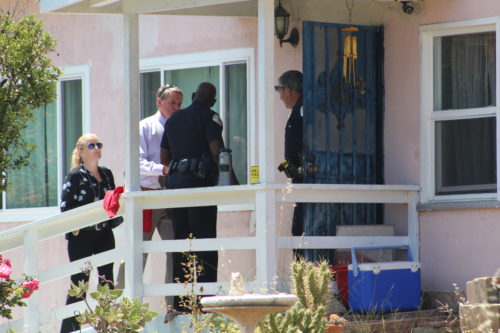 OCEANSIDE–A body of a white male Tuesday was found lying on the ground in front of an Oceanside residence with blood on his face and abrasions to his arm, Oceanside Police Department reports.

Oceanside police officers responded just after 8 a.m. to a call of a male lying in the grass in the 2000 block of South Tremont Street. The victim was pronounced dead on scene, according to authorities.

The victim, 18-year-old Anthony Calvert, was a student from Oceanside High School, according to his friends and neighbors who knew him.

He was an amazing, amazing boy. He didn’t deserve what he got, that’s for sure,” said Tina Bitters, a friend of the victim.

Detectives have focused their attention on a two-story house, located several feet from where the body was found. At press time, they were waiting for a search warrant to enter the residence. Authorities believe the residence may have connections to the male’s death.

No arrests have been made.

The County Medical Examiners Office will do an autopsy on the victim to determine the cause of death.

Detectives are asking anyone with information to call the Oceanside Police Department at (760) 435-4911.