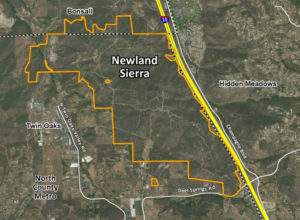 SAN DIEGO–The San Diego County Board of Supervisors voted 4-0 Wednesday to approve the Newland Sierra project that plans to build 2,135 homes, commercial space, parks, trails and a school site in North County along Interstate 15 near Escondido and San Marcos.

The Newland Sierra project is planned to be built just west of Interstate 15 and five miles north of state Route 78. It will include 1,140 single-family homes and 995 multi-family townhomes, all with solar rooftops, in seven neighborhoods.

The project will also feature a 58.3 acre town center, where 95 of the 995 townhomes will be built, along with 81,000 square feet of commercial space that the project’s representatives say will be anchored by a grocery store, and a six-acre school site.

The project will also include a 1,209-acre biological preserve, nearly 36 acres of public and private parks, and 19.2 miles of multi-use and community trails.

The project is also close to local transit, including the North County Transit District’s Sprinter rail line, and California State San Marcos and Palomar College. The project is expected to be built in two phases over approximately 10 years.