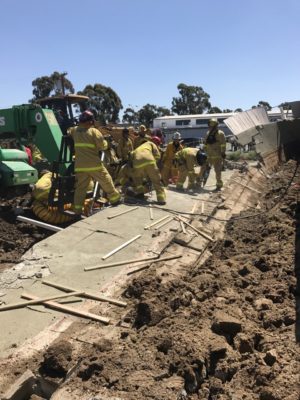 EL CAJON–A construction worker Sunday was fatally injured when a block concrete wall fell on him at a construction site in El Cajon, authorities report.

Heartland Fire and Rescue crews, Lakeside Fire, San Diego Fire, Cal Fire-San Miguel and Helix Water District, were dispatched just after noon to the reports of a block wall that fell over into a trench onto a construction worker at the corner of North Marshall and Wagner Street in El Cajon.

Firefighters arrived within 5 minutes to confirm that a section of a cinder block concrete wall, had fallen over, trapping a construction worker underneath it. Fire crews immediately began clearing the area away from the victim. After approximately one and a half hours, fire crews were able to locate the victim and determined him to be deceased. No communications were ever made with the victim, a 51 year old male. A second worker was also injured, and transported to the hospital with mild injuries.

Construction crews were working to dig a trench for the foundation of a new wall at the site of a new car dealership, when an existing wall behind them fell over. Cal-Osha was called to investigate the accident.