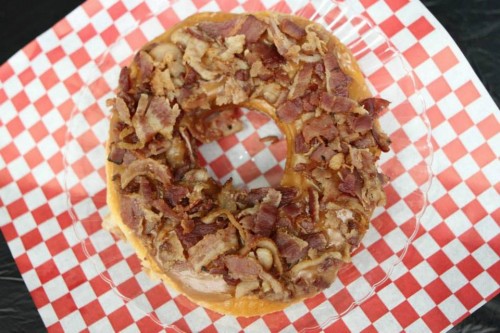 SO. CA–The Big Bite Bacon Fest is taking over Southern California this summer with two sizzling festivals for the extreme bacon lovers.  The festival will make its second annual debut at The San Diego County Fair, presented by Albertsons/Sav-on, on July 5 and then head down to Long Beach for the first ever Bacon Fest at The Queen Mary on August 2.

No matter where you are in Southern California, the Big Bite Bacon Festival has your bacon cravings covered with bacon inspired cuisine, cook-offs, beer tastings, entertainment, pageants, games and more.

Big Bite Bacon Fests welcome bacon lovers of all ages and feature an unprecedented variety of delectable bites showcasing the diversity of bacon. Innovative food options range from sweet desserts, accented with savory cracklins to addictively salty culinary creations. Bacon-tasting sessions are offered for guests to sample bacon inspired culinary dishes from local restaurants and vendors from the Southern California region. Craft beer tastings from local breweries will be available to quench your thirst from all the bacon goodness.

The events celebrate home cooks and professional chefs alike through a fully sanctioned cooking competition in honor of the star ingredient. Professional and amateur levels call on the best chefs and home cooks in Southern California to compete for their stake in a $3,000 prize fund and the title of “Best Big Bite Bacon Dish.” Entry is $39 and first place winners will be sent on to the World Food Championships in Las Vegas, NV in November. 1st place winner takes home $1,700 in prize money with paid entry and travel stipend to compete in Las Vegas; 2nd place takes home $800; 3rd place rounds out the victors with a $500 cash prize. Last year’s BBBF contest winners went on to the World Championships and finished 4th place for the amateurs, and 1st place for the pros winning the grand prize of $10,000 and the title of Bacon World Champion.

Bacon themed entertainment will also be on hand at both festivals, starting with the opening ceremonies that include the “Bacon Anthem” and “Pardoning of The Pig.” Additional attractions keep the theme alive through games like Pig Pong, Pork Ladder Toss, Bacon Hole, a Big Daddy Bacon Pageant, and a dunk tank.

Have you “porked” the question yet? At the San Diego Big Bite Bacon Fest you could win the wedding of your wildest bacon dreams! Submissions are now open online at http://bigbitebaconfest.com to enter to win the second annual Big Bite Bacon Fest wedding. This bacon-fun-filled-affair will be loaded with surprises of romantic porkportions. Walk down your dream aisle of bacon ends with your bacon bouquet in hand to your waiting love adorned with a bacon boutonniere. Soon after your big-bacon-bash, you will take wing as pigs fly, to your very own Hog-Heaven-Honeymoon Adventure!

Tickets for the July 5 Big Bite Bacon Fest are available online now and include entry to the San Diego County Fair, the 7th largest fair in North America. Now through April 6 take advantage of the San Diego “Early Pig” special and save up to 57% off with a variety of VIP and General Admission pricing options that range from $22-$65. Tickets for the Big Bite Bacon Fest at the Queen Mary in Long Beach will be on-sale starting April 11.

Big Bite Bacon Fest is a fun filled, energetic event that holds the potential to please every palate. The event attracts media from around the globe and proudly forges ahead as the first “Food-tainment” event of it’s kind.