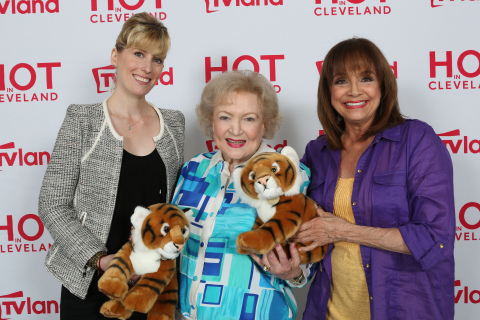 LOS ANGELES–(BusinessWire)–Actress Valerie Harper is celebrating Mother’s Day with a roaring gift from friend and fellow actress Betty White. White adopted a Sumatran tigress and her new baby cub for Harper and her daughter Cristina with The Lifeline Program and the Greater Los Angeles Zoo Association’s “Adopt an Animal Program.”

Harper and the tigress have much in common: Both are doting mothers fighting for their survival. Harper, who adopted Cristina at age 4 in 1987, recently announced her diagnosis with a rare terminal brain cancer. The tigress and her new cub must also fight to overcome challenges of an alarmingly diminishing population. Due to agricultural habitat destruction and poaching, Sumatran tigers are an endangered species; only 250 to 300 remain in the wild.

“I won’t buy any of those silly things they tell her. Valerie will outlive me and I plan on sticking around for a long time,” said White regarding Harper’s life expectancy prognosis on the set of the reunion episode in an interview with People Magazine. White added that she is proud of Harper’s steady resolve in the face of adversity, calling her “Miss Positive.”

“Betty was devastated by her good friend Valerie’s announcement and knew she should do something about it,” said Lifeline SVP, Stephen Terrell. “The tigress symbolizes strength and power, and the new cub embodies hope. We couldn’t think of a more perfect way to honor her friend. We hope this puts a smile on Valerie’s face during her resilient fight against this rare disease.”

The Lifeline Program is a life settlement provider in Atlanta, GA. Founded in 1989, the company assists baby boomers, seniors and their families by purchasing unwanted or underperforming life insurance policies for immediate cash.