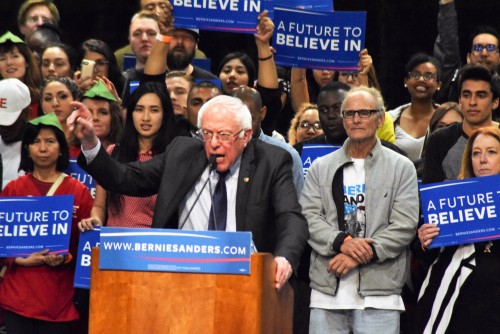 SAN DIEGO–Democratic presidential candidate Bernie Sanders made a campaign stop in San Diego for a rally with more than 9,000 thousands of his supporters.

The rally, “A Future to Believe In,” was held Tuesday night at the San Diego Convention Center’s Exhibit Hall D and E.

Actress Rosario Dawson, a supporter of Sanders, kicked off the festive event with the introduction of the 74 year-old Vermont senator. Sanders’ wife, Jan briefly joined her husband on stage to greet supporters.

Sanders began his speech by thanking hundreds of dedicated staff and volunteers nationwide who have stuck with him throughout his campaign.

“When we began this campaign against the most  powerful, political organization in the world, we had no money and no volunteers,” Sanders said. “Now we have hundreds of thousands of volunteers all over this country.”

Sanders’ rival, former Secretary Hillary Clinton, the front-runner in the Democrat presidential race, has raised more than  $31 million dollars from supporters and corporate donors. Sanders has flatly refused to accept any corporate money, instead relying on online grassroots donations from his supporters.

He says the nation could not move forward unless “we are prepared to confront the real issues facing our country.”