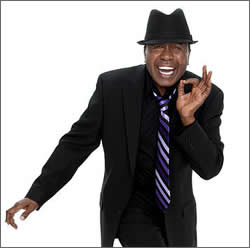 Legendary Ben Vereen will be in San Diego for the awards ceremony.

SAN DIEGO–Broadway/San Diego will bring back the 2016 Ben Vereen Awards, taking place on May 29, 2016 at the Historic Balboa Theatre in downtown San Diego.

The local winning Best Actor and Best Actress high school performers will each win a $1,000 award and will be flown to New York for a week of intensive training from Broadway actors, dancers and singers before they compete in the national finals, The Jimmy Awards, on a Broadway stage for a $10,000 prize towards a college scholarship.

“This is going to be the best year yet,” said stage and screen legend Ben Vereen, “I’ve seen how much incredible talent we have in San Diego and I know our students can go all the way at Nationals. We truly are helping young people change their life for the better through the performing arts”.

The area competition is sponsored by San Diego County Credit Union who will also provide an award for Best Theatre Teacher.

Interested high school theatre departments who produce an approved musical may apply to have their high school musicals adjudicated by a team of local theatre professionals including teachers, directors, choreographers and arts administrators who will nominate in the categories of Best Actor, Best Actress and Best Musical.

Deadlines for schools to apply are:

The Ben Vereen Awards is also now accepting written and video entries for the 2nd annual Wellness Through the Arts –A Student Health Initiative essay contest, open to all San Diego County High School students, which focuses on key topics of obesity, diabetes, low self-esteem, and bullying. Five individual winners of the essay contest will receive a $500 award and one theatre department’s collaborative essay will receive a $1,000 award. The deadline for submissions is February 1, and the winning essays will then be reworked into one presentation piece that will be performed live at the Ben Vereen Awards on May 29.

Membership and sponsorship tickets are available at http://www.benvereenawards.com/support-ben-vereen-award.

​A limited number of general admission tickets will go on sale February 1 through www.Ticketmaster.com or at www.BenVereenAwards.com