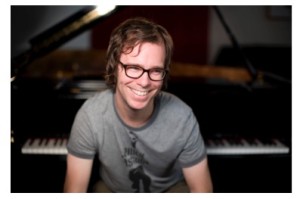 Folds and the San Diego Symphony will perform the pianists’ brand new three-movement “Concerto for Piano and Orchestra,” which draws on many recognizable classical influences such as Ravel and Gershwin. The piece tests the bounds of traditional orchestral music and Folds describes it as “proudly and overtly derivative.” The evening’s program also includes Gershwin’s famous An American in Paris and music from Leonard Bernstein’s West Side Story.

Multi-platinum singer-songwriter Ben Folds spent most of 2013 composing the critically acclaimed “Concerto For Piano and Orchestra,” which premiered in March 2014 accompanied by the Nashville Symphony. Since its release, he’s spent much of his time touring the globe, performing the three-movement concerto as well as orchestrations of his classic pop hits before sold-out crowds with some of the world’s greatest symphony orchestras. “Concerto For Piano and Orchestra” was produced and recorded by legendary rock engineer Elliot Scheiner.

The success of “Concerto For Piano and Orchestra” led Folds to begin working on his latest full-length studio album, So There (New West Records, Sept. 2015), which features the concerto recorded alongside Brooklyn-based chamber sextet, yMusic.

yMusic has earned critical praise from Time Out New York and NPR, and has previously worked with Dirty Projectors, Jose Gonzalez, Beck, and Sufjan Stevens. Upon being introduced to Music, Folds was immediately enthralled by the group’s virtuosic execution and unique configuration of string trio, flute, clarinet and trumpet. The resulting partnership was fueled by mutual admiration and musical respect, a union in which yMusic’s textures and approach were seamlessly woven into Folds’ inimitable songs on So There to create something both true and unprecedented.

With a brilliant career, beginning as leader of the Ben Folds Five, his catalog of works isextensive to say the least. Folds has released multiple studio albums, a pair of recordings documenting his renowned live performances, a remix collection, music for both film and television, and an acapella record. He’s also collaborated with artists spanning from Sara Bareilles and Amanda Palmer to Nick Hornby and William Shatner. Additionally, he has earned universal respect for his insight as a judge on five highly rated seasons of NBC’s acapella competition series, The Sing Off.

The Center is located at 340 N. Escondido Blvd. in Escondido. The ticket office can be reached at (800) 988-4253. Tickets can also be purchased online. To learn more, including performance dates, times and ticket information, visit artcenter.org.