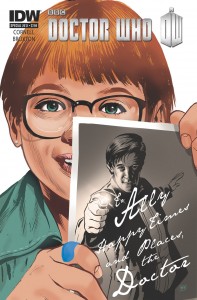 SAN DIEGO–IDW Publishing and BBC Worldwide will conclude their joint celebration of the Doctor’s 50th anniversary with the release of a Doctor Who Special the final week of 2013. This oversize issue will be written by fan-favorite Doctor Who writer Paul Cornell and features art by Jimmy Broxton.

In this special one-shot story, a strange force flings the TARDIS and the Doctor into our own universe! Once here, the Doctor encounters a 10-year-old girl who happens to be a huge fan of the Doctor Who TV show. The Doctor grapples with being a fictional character as well as and a monster lurking at the girl’s school on the way to coming face-to-face with the actor who portrays him, Matt Smith!

BBC Worldwide and IDW have worked together since 2007. For the 50th Anniversary celebration, IDW launched a new ongoing series led by writer Andy Diggle, and the new Doctor Who: Prisoners of Time, an extended maxi-series that spotlights all eleven Doctors. Additionally, IDW brought forth the first-everDoctor Who crossover in any medium, the 2012 Star Trek: The Next Generation/ Doctor Who event series Assimilation,” The BBC Worldwide/IDW partnership will conclude following the end of these 50th anniversary celebrations in December.

“IDW is a great partner and we’re very proud of the comics that we have created and released together. By extending our partnership, we are able to provide Doctor Who fans with more than 20 additional titles in celebration of the 50th Anniversary,” states Soumya Sriraman, Executive Vice President Home Entertainment and Licensing.

“We’ve been extremely proud to be the American home to new Doctor Who comics these last six years,” said Chris Ryall, IDW’s Chief Creative Officer/Editor-in-Chief. “We feel like we’ve said a great many things with our comics—so it now feels like a good time to let Doctor Who comics regenerate along with the coming new Doctor on the TV series.”

BBC Worldwide will announce the plans for 2014 in the next coming weeks.