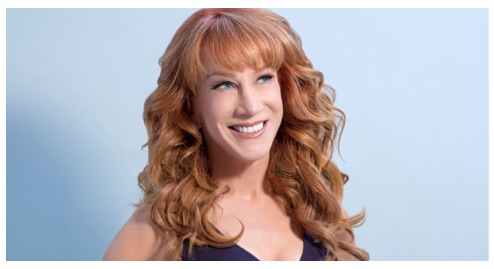 It is a sure bet that audiences will be doubled over with laughter as Griffin delivers her rapid-fire wit, outrageous musings on popular culture, and hilarious celebrity anecdotes. With her ability to break through the entertainment clutter with her universally recognized brand of pull-no-punches comedy, this is a show not to be missed.

Kathy Griffin is a towering figure on television, on tour and in publishing. She’s perhaps best known for her role as the best friend to Brooke Shields on NBC’s Suddenly Susan as well as her own hugely popular reality TV show, Kathy Griffin: My Life on the D-List. Buoyed by her dedicated fans, Griffin’s live stand-up performances are legendary and in a class of their own. She has performed at sold out shows everywhere from New York City’s Carnegie Hall to the Sydney Opera House.

In 2013, Kathy Griffin was inducted into the Guinness Book of World Records for writing and starring in an unprecedented 20 televised stand-up-specials — more than any comedian in history. She’s co-hosted the CNN New Year’s Eve special with Anderson Cooper every year since 2007. Additionally, she is one of televisions go-to-hosts for premier live events and has hosted The Billboard Music Awards, the 41st Annual Daytime Emmy Awards and AARP’s Movies for Grownups Gala. In 2014, Griffin made history with her 6th consecutive Grammy nomination and first win for “Best Comedy Album” (Kathy Griffin: Calm Down Gurrl), joining Whoopi Goldberg and Lily Tomlin as the only other female comedians to ever win a Grammy award for “Best Comedy Album.”

Aside from stand-up comedy shows, hosting at events and television features, Kathy Griffin’s boisterous and revealing memoir, Official Book Club Selection: A Memoir According to Kathy Griffin, debuted at No. 1 on the coveted New York Times Bestseller List. She’s also won various additional awards and honors, including The Human Rights Campaign’s Ally for Equality, Iraq and Afghanistan Veterans of American’s Leadership in Entertainment honor, GLAAD’s Vanguard Award, The Trevor Life Award from the Trevor Project, and a Gracie Award for “Outstanding Female Lead.”

Join the thousands of fans who have experienced Kathy Griffin’s hysterical performance and enjoy an unforgettably funny evening at the Center on September 10, 2016!
About the California Center for the Arts, Escondido With a mission of bringing people together to discover, create and celebrate both the visual and performing arts, the California Center for the Arts, Escondido is the cultural center of North San Diego County.

The Center’s unique campus includes a 1,523-seat concert hall, a 404-seat theater, a contemporary art museum, art and dance studios, and a full-service conference center with meeting and banquet facilities. The Center also runs an extensive education program and produces free community events. San Diego Magazine named the Center the “Best Limited Engagement” in North County, and the Center was named in the Top Five for U-T San Diego’s Readers Poll for “Best Live Music Venue.” In 2016, the Center was named “Organization of the Year” by the Escondido Chamber of Commerce.

The Center is located at 340 N. Escondido Blvd. in Escondido. The Ticket Office can be reached at (800) 988-4253. Tickets can also be purchased online. To learn more, including performance dates, times and ticket information, visit artcenter.org.