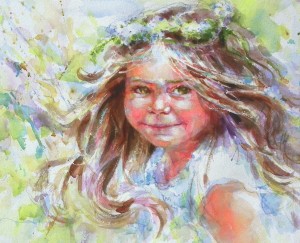 FALLBROOK–Artist Janice Cipriani-Willis will be demonstrating her watercolor techniques at Fallbrook Art Association’s general meeting on November 12 in Fallbrook.

An accomplished watercolorist, she began her art education by earning a B.A. in Fine Arts from California State University, Los Angeles. She continued her education by studying with nationally known artists, such as Don Andrews, Gerald Brommer, Frank Francese, and Frank Webb. A lifetime of vacationing in the national parks of the west has inspired Cipriani-Willis to express the beauty of the world in watercolors. She sees the pieces of light that play over forms as a marvelous mosaic.

“In my watercolors, I rearrange the light playing over forms into an image of this world’s beauty,” Cipriani-Willis says.

Cipriani-Willis’ current work has been inspired by watching people in situations that engender a range of human feelings. She creates poignant portraits focusing on the different kinds of beauty seen in their faces.

She has won many awards, including Best of Show and First Place in California and elsewhere. She is a signature member of Watercolor West. Her work can be seen at Dorland Mountain Arts Colony by appointment, and at the Brandon Gallery in Fallbrook.

Fallbrook Art Association meets on the second Thursday of the month, September through June.  The general meetings are held at the Fallbrook School of the Arts, at 310 E. Alvarado, and are open to the public.

At 5:30 p.m., FAA members are welcome to bring in one or two “paintings in progress” for a session with the featured artist demonstrator who will give suggestions for possible improvements.

Refreshments will be served at 6:15 p.m., before a brief general meeting at 6:30 p.m., followed by the demonstration, which ends at 8:00 p.m. Each demonstrator offers a workshop the following Sunday at the same location.