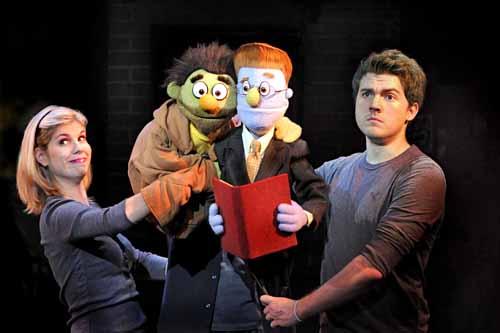 SAN DIEGO–“Avenue Q,” the smash-hit Broadway musical about real life in New York City, as told by a cast of people and puppets, will return in a Broadway/San Diego ~ A Nederlander Presentation, playing at the San Diego Civic Theatre Tuesday July 6 through Sunday July 11.

“Avenue Q” tells the story of Princeton, a bright-eyed college grad who moves to the city with big dreams and a tiny bank account. The only apartment he can afford is way out on “Avenue Q,” where everyone’s looking for the same things he is: a decent job, a stable relationship, and a “purpose.” Eventually, Princeton learns to embrace the ups and downs of city life and realizes that “the real world” isn’t so bad, after all.

The New York Times hailed “Avenue Q” as “a breakthrough musical of a very different stripe. Savvy, sassy and delicious!” and Entertainment Weekly claimed it was “one of the funniest shows you’re ever likely to see!”

Due to adult situations (like full-puppet nudity, foul language, and adult themes), Avenue Q may be inappropriate for kids under 13.