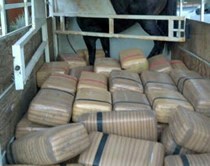 During the course of a drug smuggling investigation, the task force developed information Thursday that a vehicle traveling south on Highway 82 from Patagonia to Nogales was pulling a horse trailer possibly laden with marijuana. Task force members, along with deputies from the Santa Cruz County Sheriff’s Office, initiated surveillance in the area and observed a vehicle pulling a horse trailer failing to stay in its lane. A sheriff’s deputy pulled the vehicle over, and as soon as the vehicle came to a stop, the male driver fled the scene. He remains at large.

Inside the vehicle and horse trailer, authorities discovered 116 bundles of marijuana, weighing more than 2,900 pounds, as well as a horse.

No arrests have yet been made in the case, which remains under investigation. The horse was turned over to Santa Cruz County Animal Control.