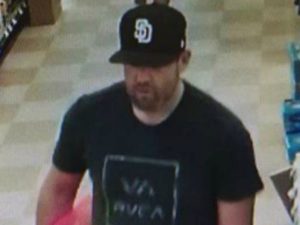 SOLANA BEACH–Crime Stoppers and investigators from the North Coastal Sheriff’s  Station are asking for the public’s help to locate an unknown suspect wanted in connection with at least two commercial burglaries that have occurred in Solana  Beach.

On September 15, at about 2:15 p.m., an unknown male entered the Dixieline Lumber and Home Center store, located at 663 Lomas Santa Fe Drive in Solana Beach, and stole a Milwaukee combo tool kit, valued at $429 and a Makita combo tool kit valued at $379. The suspect left the store through the emergency exit without paying for the items. He fled in a black Toyota Camry.

On October 19, at about 1 p.m., the same suspect entered the same Dixieline Lumber and Home Center store and attempted to steal a DeWalt drill  kit valued at $399. The manager and an employee recognized the suspect from the previous theft and started watching him more closely. The suspect noticed the employees were standing by the emergency exit as he attempted to leave the store without paying for the drill kit. The suspect left the drill kit inside and fled through the front door. In this case, the suspect was seen leaving the store in an older model red Honda Civic with plates that had been reported stolen in La Mesa.

The same suspect has committed burglaries in at least five other Dixieline Lumber and  Home Center stores in San Diego county. The suspect is described as a white or Hispanic male, 28 to 40-years-old, height between five feet, nine to six feet, one inches tall, and weighing approximately 175 to 210 pounds. He has short brown hair, a moustache, and a beard, and was last seen wearing a white t‐ shirt, dark shorts, and dark colored tennis shoes.

Anyone who recognizes the suspect, or have information about the crime, can call the North Coastal Sheriff’s Station at (760) 966‐3500, or the Crime Stoppers anonymous tip line at (888) 580‐8477. Crime Stoppers is offering up to a $1,000 reward to anyone with  information that leads to an arrest in this case. Anonymous email and text messages can be sent in via www.sdcrimestoppers.org .