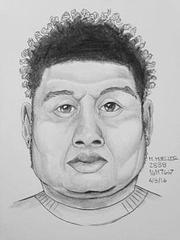 SAN MARCOS–A man suspected of trying to grab a teen jogger April 6 in San Marcos has not been located, authorities said Tuesday.

It happened between 2 p.m. and 3 p.m. on April 6 in the area of the trailhead on Melrose Drive near San Elijo Road. That’s where investigators say the man tried to a grab a 13-year-old male jogger.
The victim was able to run away from the man and was not hurt.

The jogger describes the suspect as a tall, heavyset black man with short dreadlocks that have dyed tips. He also had hair on the side of his face. He was wearing solid black “gauge” style earrings about half the size of a dime. He also had a tattoo on his left forearm. He was wearing a white t-shirt, camouflage shorts, white ankle high socks and gray tennis shoes.

The man’s vehicle is described as possibly a 2004 white Chevy pickup truck (or similar model) with a white camper shell.

Anyone with information on his whereabouts can call the Crime Stoppers anonymous tip line at (888) 580-8477. You may be eligible for a reward of up to $1,000 for information that leads to an arrest.