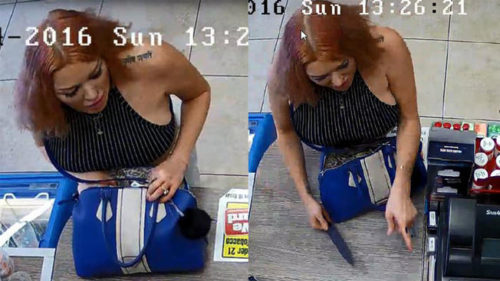 Authorities are searching for the identity of this robbery suspect.

SAN DIEGO–San Diego County Crime Stoppers and investigators from the San Diego Police Department’s Robbery Unit are asking for the public’s help in identifying and locating a woman wanted for an attempted armed robbery.

On July 24, at 1:25 p.m., an unknown adult female walked into the Quick Stop store located at 728 4th Avenue in San Diego. She asked the clerk at the counter for change for a dollar. As the clerk opened the cash register to get change, the woman pulled a large knife from her purse and demanded cash from the clerk. She then tried to grab cash from the register; however the clerk closed it preventing any loss. The clerked backed away and the woman walked out of the store and headed north on 4th Avenue.

She is described as a white female, late 30’s; five feet, nine inches to six foot tall, 165 to 170 pounds; red hair, and hazel eyes. She was wearing a black tank top with light colored jeans, black Nike sneakers, and had a blue purse with a large white stripe down the middle of it. The suspect also has unknown words tattooed on her left shoulder.

Anyone with information on the identity or location of the suspect is asked to call the police department’s robbery unit at (619) 531-2299, or the Crime Stoppers anonymous tip line at (888) 580-8477. Crime Stoppers is offering up to a $1,000 reward to anyone with information that leads to an arrest in this case. Anonymous email and text messages can be sent via www.sdcrimestoppers.org.