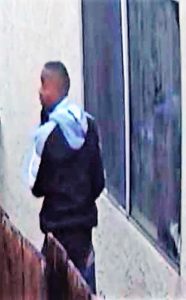 SAN MARCOS–Investigators from the San Marcos Sheriff’s Station is asking the public’s help in identifying a man wanted in connection with a home burglary in San Marcos.

The suspect forced his way into the house through a locked, side bedroom window after breaking the glass. He ransacked the home and stole jewelry.

The suspect is also believed to have burglarized another home in Escondido on January 11.

He is described as a black male in his early to mid-20s wearing black shoes, dark jeans and a black jacket. The jacket had a gray hood and the sleeves had gray and white stripes. He was wearing gloves and carrying a black handbag.

Anyone with information is urged to call Crime Stoppers anonymous tip line at (888) 580-8477. A reward of up to $1,000 is being offered for information that leads to an arrest.