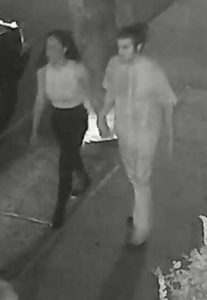 A surveillance photo of the persons of interest.

SAN DIEGO–Crime Stoppers and investigators from the San Diego police department’s traffic division are asking for the public’s help in identifying and locating the person(s) responsible for striking three pedestrians with a vehicle in the Pacific Beach area.

On August 5, at approximately 1:09 a.m., a silver four-door sedan was driving eastbound on 900 Garnet Avenue when the vehicle struck three pedestrians who were crossing the roadway. The vehicle fled the scene and drove eastbound on Garnet Avenue. All three pedestrians who were struck were adult males and were all hospitalized. The males have various injuries including lacerations, fractures, and brain injuries.

Investigators believe, based on evidence collected from the scene, that the vehicle is a newer model silver four-door Hyundai Elantra.  The vehicle appears to have stock brushed aluminum wheels and there are no other unusual markings on the vehicle.  The vehicle may have damage to its front end area including the grill, hood, and windshield.

Investigators learned after conducting follow-ups that the three victims had been in an altercation with a male and female minutes prior to them being struck by the vehicle. The male and female are being considered persons of interest, according to authorities.

Anyone with information on the identity or location of the persons of interest or the suspect vehicle is asked to call SDPD’s Traffic Division at (858) 495-7813 or the Crime Stoppers anonymous tip line at (888) 580-8477. Crime Stoppers is offering up to a $1,000 reward to anyone with information that leads to an arrest in this case. Anonymous email and text messages can be sent via www.sdcrimestoppers.org.