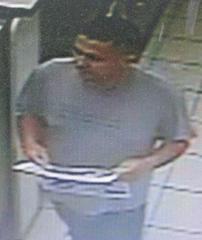 SAN MARCOS–Authorities are searching for an adult male accused of groping an eight-year-old girl in San Marcos.

The June 21 incident occurred between 7 and 8 p.m. at a laundromat in the 100 block of South Rancho Santa Fe Road in San Marcos.

The victim walked away from her mother to a nearby sink to wash her hands. A man came up behind her and lifted her up to help her. As he set her down, he inappropriately touched the girl over her clothing and then left the laundromat.

The girl reported the incident to her mother after they left the laundromat.

The suspect is described as a Hispanic man, between 30 and 50 years-old, about five feet, seven inches tall, weighs about 160 pounds with short black or grayish hair. At the time of the incident, he was wearing a gray shirt and jeans.

Anyone with information call call Crime Stoppers at (888) 580-8477. You can be eligible for up to a $1,000 reward for information that leads to a felony arrest.