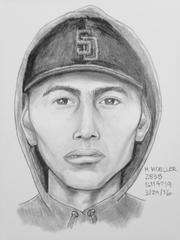 VISTA–Investigators are seeking leads on the identification and location of a young male suspected of stabbing a female juvenile at her home in Vista, Sheriff’s department said Wednesday.

The incident occurred at 10 a.m. March 21 at a home located near the intersection of E. East Drive and N. Santa Fe Avenue. That’s where a male entered the house without permission and stabbed a 15-year-old female with an unknown weapon.

The victim was treated for non-life threatening injuries at a local hospital.

The suspect is described as a 16 to 18 year-old Hispanic male, height between five feet, five to five feet ten inches tall. His weight is between 160 and 200 pounds. He was wearing a grey or black hooded sweatshirt, jeans and possibly a black San Diego Padres hat. He was last seen riding a small green bicycle.