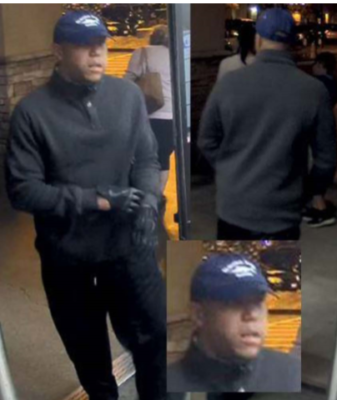 POWAY–Crime Stoppers along with investigators from the Poway Sheriff’s Station are asking for the public’s help in identifying and locating a suspect wanted for a commercial armed robbery at a Walmart in Poway.

On November 10, at around 8 p.m., an unknown black male approached the Customer Service counter at the Walmart located at 13425 Community Road in Poway. The man displayed a semi-automatic silver and black pistol in his waistband and demanded the employee open the cash register. The suspect removed the entire cash drawer and took off on foot with an undisclosed amount of money.

The suspect is described as a black male between 30 to 40-years-old, standing 5’10” to 6’0” tall, unshaven and with a medium complexion. He was last seen wearing a blue baseball-style cap with white lettering and an image of a marlin fish on the front. It may be advertising for a charter fishing vessel. He also had on a black or dark blue long sleeve shirt, black pants, black shoes and black Nike gloves.