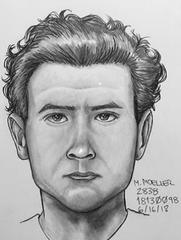 VISTA–San Diego County Crime Stoppers and Sheriff’s department investigators are asking for the public’s help to identify and locate a male suspect wanted for assault with intent to commit rape.

The man contacted the victim a second time in front of 606 Civic Center Drive. He again rode his bicycle behind the victim and grabbed her buttocks with his hand. The man made sexual comments to the victim and told her that he was going to take her and sexually assault her. The man grabbed the victim but she was able to fight back and break away from him. The victim began screaming and the man was scared away. He fled westbound on his bicycle towards Eucalyptus Avenue.

He is described as a white or light skinned Hispanic male in his early 20’s, standing between 5’ 5”, 5 to 5’7″ tall, weighing 140 to 160 pounds with a thin build. He has thick wavy short hair and was last seen wearing a black t-shirt and dark pants. He was riding a black BMX style bicycle.

If you recognize the suspect, call the Sheriff’s Department’s Major Crimes Unit at (858) 974-2354 or the Crime Stoppers anonymous tip line at (888) 580-8477. Crime Stoppers is offering up to a $1,000 reward to anyone with information that leads to an arrest in this case. Information on how to send anonymous emails and mobile app tips can be found on our website www.sdcrimestoppers.org.