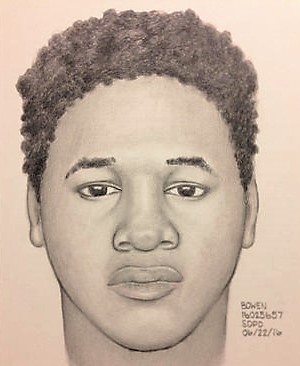 Police sketch of alleged attacker at the 24 Hour Fitness in San Diego.

SAN DIEGO–Stoppers and San Diego police investigators are asking for the public’s help in identifying and locating a male wanted for sexual assault on an adult female at a fitness club in San Diego.

The suspect is described as a black male, mid 20’s, five feet eight to five feet, nine inches tall, 140 to 150 pounds, thin build, clean shaven, with black wavy hair. At the time of the assault, the male was wearing black shorts, black flip-flops, and had no shirt on.

The suspect attempted to sexually assault an adult female victim while she was taking a shower at the fitness club. He forcibly opened the glass shower door while the victim attempted to hold it closed. He stepped into the shower stall and motioned for the victim to be quiet. He grabbed the victim’s shoulder and prevented her from exiting the shower stall. The victim screamed and pushed the suspect. He fled the area before police arrived.

Anyone with information on the identity or location of the suspect is asked to call SDPD’s Southeastern Division at (619) 527-3500 or the Crime Stoppers anonymous tip line at (888) 580-8477. Crime Stoppers is offering up to a $1,000 reward to anyone with information that leads to an arrest in this case. Anonymous email and text messages can be sent via www.sdcrimestoppers.org.