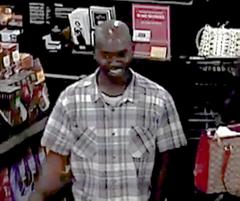 Surveillance video of the suspect.

SAN DIEGO–Crime Stoppers and investigators from the Santee Sheriff’s Station  are asking for the public’s help to locate an unknown suspect wanted in connection with identity theft and burglary.

On October 13 and 14, an unknown male used a lost or stolen debit card to make unauthorized purchases at several businesses throughout San Diego County.

Authorities described him as a black man, medium build, between 25 to 40 years old, with  a bald or shaved head. He may have a mustache and was last seen wearing a grey  and white button down shirt and jeans.

Crime  Stoppers is offering up to a $1,000 reward to anyone with information that leads to an arrest. Anonymous email and text messages can be sent to www.sdcrimestoppers.org.