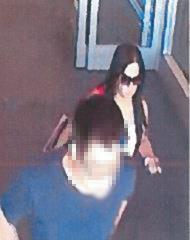 Unidentified suspect wanted in a series of thefts at Target stores.

ENCINITAS–San Diego County Crime Stoppers and investigators from the North Coastal Sheriff’s Station are asking for the public’s assistance to help identify and locate a woman wanted in connection with two shoplifting incidents at the Target store in Encinitas.

She is described as an Asian adult female approximately 30 years in age. She was last seen wearing black sunglasses on top of her head, a white tank top, blue shorts and black sandals.

Anyone with information on the identity or location of the suspect is asked to call the Crime Stoppers anonymous tip line at (888) 580-8477.

Crime Stoppers is offering up to a $1,000 reward to anyone with information that leads to an arrest in this case.