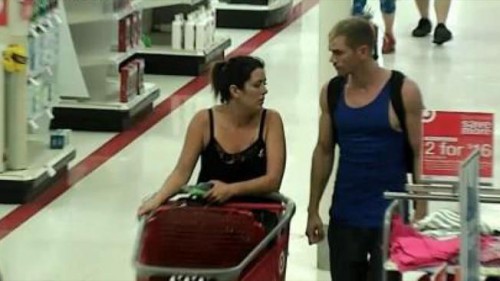 Surveillance photo of the suspects.

LAKESIDE–Crime Stoppers and investigators from the Lakeside Sheriff’s Substation are asking for the public’s assistance to help identify and locate a man and a woman wanted in connection with a car burglary and the use of stolen credit cards at several businesses in the East County.

The vehicle burglary occurred September 23 between 5:00 p.m. and 7:30 a.m. on September 24. The couple broke into a vehicle that was parked in the driveway of a home in the 10200 block of Rio Camino in Lakeside. They later used stolen credit cards to make purchases at Target, Wal-Mart, and other businesses in El Cajon and Alpine. The total loss is approximately $1,800. The couple are wanted on vehicle and commercial burglary, identity theft and credit card fraud charges.

They may be driving a white Chevrolet Monte Carlo, or similar style car.