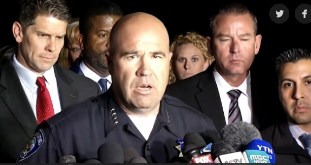 SAN BERNARDINO—Authorities released the names of the two heavily-armed suspects that killed 14 people and wounded 17 others at a Christmas party Wednesday morning at the Inland Regional Center in San Bernardino.

The suspects have been identified as 28 year-old Syed Rizwan Farook and 27 year-old Tashfeen Malik. Both suspects were killed during a gunbattle inside their black SUV with law enforcement officers.

Farook, a U.S. born citizen, was employed for five years as an environmental specialist at the San Bernardino County Health Department, San Bernardino Police Chief Jarrod Burguan said at a press conference Wednesday evening. He says information about Malik’s residential status was unavailable at this time.

Chief Burguan addressed earlier media reports of Farook attending the Christmas party at the Inland Regional Center, but left early after a dispute with San Bernardino county employees at the event, only to return with assault-style fire arms.

“He was at the party. He did leave the party early under circumstances that were described as
angry or something of that nature,” Chief Burguan said.

Information about the party incident led investigators to stake out a residence in Redland. Police officers encountered Farook which led to a vehicle pursuit and officer-involved shooting with the suspects.

Authorities have not ruled out terrorism or workplace violence, according to the FBI. The investigation is ongoing at this time.

According to authorities, San Bernardino County Department of Public Health rented the facility for a holiday party for their employees.

Inland Regional Center is a nonprofit organization that serves people with developmental disabilities in San Bernardino and Riverside counties. The facility is the largest of the regional centers in the State of California.

Authorities say the armed suspects, dressed in black military-style clothing and armed with assault weapons, allegedly entered the building and opened fire on the employees at the party. After the shootings, the suspects took off in a black SUV, according to witnesses.

Shortly after the mass shootings, law enforcement officers responded to 9-1-1- calls of possible shootings at the center. They arrived at the scene and entered the building to search for suspects one room at a time. An explosive device was found at the center, an official of the Bureau of Alcohol, Tobacco, Firearms and Explosives says.

Paramedics transported injured victims to a nearby hospital in Loma Linda. Conditions of the victims ranged from serious to minor. The hospital has not released additional information on the victims’ status.

During the search, all government and city facilities in San Bernardino county were on lockdown. No one could enter or leave the buildings. All facilities reopened later in the afternoon after the suspects were apprehended.

A tip on the suspects led law enforcement officers to stake out a home in Redlands. They spotted a dark-colored SUV which matched witnesses description of the vehicle. A pursuit followed with gunshots fired from the suspects’ vehicle. Heavily armed police officers surrounded the bullet-ridden SUV. The driver and passenger inside the SUV were killed during the gunbattle. Officers found weapons including a handgun, rifle and ammunition magazines inside the SUV.

The investigation of shootings is ongoing.