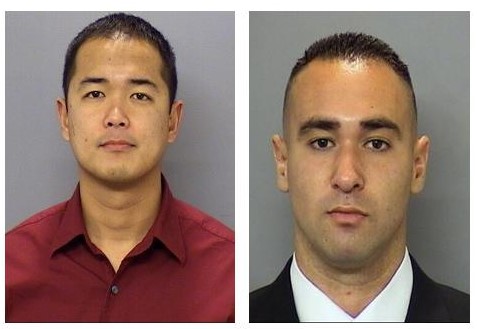 The chief released the names of the two officers who were shot during a 11 p.m. traffic stop in the Southcrest area in San Diego.

The slain officer was Jonathan Deguzman, 43, a 16-year veteran of the San Diego Police Department. He leaves behind a wife and two young children.

Zimmerman personally knew Deguzman when she was a lieutenant at Mid-City Division. She remembered him as a man who cared about his community.

“This is gut-wrenching. He cared. He came to work every single day just wanting to make a positive difference in his community,” Zimmerman recalled.

Officer Wade Irwin, 32, a nine-year veteran of the department, suffered gunshot wounds to the upper torso. He is expected to survive his injuries, Chief Zimmerman told reporters Irwin’s wife was at his side all night at UC San Diego Medical Center.

“We are grateful that Officer Wade Irwin is expected to survive the attempt on his life,” Chief Zimmerman told reporters. “Our hearts go out to the wife and two kids of fallen Officer Jonathan DeGuzman.”

Zimmerman also revealed the identities of the two suspects arrested in connection with the fatal shootings.

The first suspect, Jesse Michael Gomez, 52, is hospitalized with a gunshot wound, according to Zimmerman. The second potential suspect, Marcus Antonio Cassani was taken into custody by officers after a 6-hour SWAT standoff at a home in the 4000 block of Epsilon Street had ended.

Cassani’s role in the attack of the officers is under investigation. Authorities added that Cassani had an outstanding warrant.

The deadly shooting occurred Thursday evening when Officers Deguzman and Irwin, both gang suppression officers, made a stop in the Southcrest area.

“We have not been able to determine if it was a traffic stop. It happened extremely quickly,” Zimmerman said.

Zimmerman said officers were wearing body cameras at the time of the shootings. Video of the confrontation is expected to be released at a later date.

“Our gang suppression team goes out everyday. To have this happen to our police officers.. it is tragic for everyone,” she said.

The investigation is on-going.