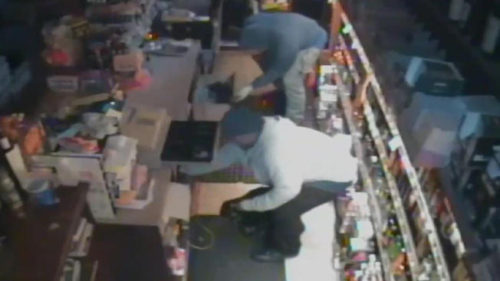 ENCINITAS–San Diego Crime Stoppers and Sheriff’s department investigators are asking for the public’s help to locate two men wanted in connection with the burglary of a liquor store in Encinitas.

The robbery occurred just after 4:30 a.m. on September 13 at the Village Spirit Shop, located at 1552 Encinitas Boulevard in Encinitas.  Two men gained entry into the liquor store by throwing a rock through the front window. The suspects took cigarettes, money and broke numerous liquor bottles.  The total estimated loss was $15,000.

The second suspect is described as a 25-year-old African American or Hispanic man, standing six foot tall and weighing about 180 pounds. He was last seen wearing a baseball cap with a white bill, a blue hoodie and black tennis shoes.

Anyone who recognize the suspects, or have information about the robbery, can call the North Coastal Sheriff’s Station at (760) 966-3500, or the Crime Stoppers anonymous tip line at (888) 580-8477. Crime Stoppers is offering up to a $1,000 reward to anyone with information that leads to an arrest in this case. Anonymous email and text messages can be sent in via www.sdcrimestoppers.org.