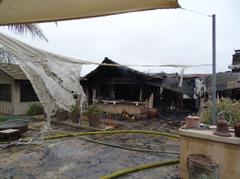 BONSALL–Investigators from the Sheriff’s Bomb and Arson Unit are looking for information about a suspicious house fire in Bonsall.

Firefighters with North County Fire put out the flames. No one was hurt. Damage to the home is estimated at $900,000.

Call the Crime Stoppers anonymous tip line at (888) 580-8477. Crime Stoppers is offering up to a $1,000 reward to anyone with information that leads to an arrest in this case.