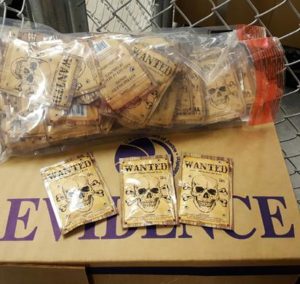 Tucson, AZ–Investigators from multiple federal and local law enforcement agencies, including U.S. Immigration and Customs Enforcement’s (ICE) Homeland Security Investigations (HSI) and the Drug Enforcement Administration, executed search and arrest warrants in the Tucson area last week as part of a multi-state probe targeting the distribution and sale of synthetic cannabinoids, often referred to as “spice.”

More than 100 law enforcement personnel from over a dozen federal, state, and local agencies participated in the enforcement actions. All told, investigators served a total of 32 federal search warrants in Tucson, Denver, and Long Beach, and took 18 suspects into custody. Those arrested face federal charges filed by the U.S. Attorney’s Office for the District of Arizona.

“HSI and it law enforcement partners are at the forefront of combating illicit activities, including the sale of synthetic drugs,” said Bradford Bench, interim special agent in charge of HSI Phoenix. “Criminals who seek to spread their illegal business in our communities will not escape the reach of law enforcement. We continue to investigate, disrupt, and dismantle dangerous trafficking schemes like this that pose a threat to public safety.”

“The trafficking and abuse of synthetic drugs like spice is a health and safety concern for all Arizonans. These substances are dangerous and potentially lethal for the people who take them,” said Doug Coleman, special agent in charge of DEA Arizona. “DEA and our law enforcement partners will remain steadfast in our efforts to protect America’s citizens from the misery of drug use and abuse.”

In addition to HSI and the DEA, numerous other federal, state, and local law enforcement agencies participated in the investigation and/or this week’s resulting takedown. Those agencies include IRS-Criminal Investigation; U.S. Customs and Border Protection (CBP); CBP Border Patrol; the Tucson, South Tucson, and Sahuarita police departments; the FBI, the Bureau of Alcohol, Tobacco, Firearms and Explosives; ICE Enforcement and Removal Operations; the U.S. Marshals Service; and the Pima County Sheriff’s Office.

“This operation will be instrumental in restoring the quality of life for the neighborhoods impacted by the effects of the “spice” epidemic,” said Tucson Police Chief Chris Mangus. “We would like to thank the federal and local partners who participated with us during this investigation, as well as the community, which has patiently waited for this investigation to conclude.”

Marketed as “herbal incense” and “potpourri,” under names such as K2 and Spice, synthetic cannabinoids are sold at convenience stores, head shops, gas stations and online, from both domestic and international sources. The abuse of these substances has been linked to numerous health risks and even death.