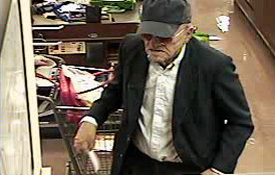 The tenth bank robbery in the “Geezer Bandit” series is believed to have occurred June 7 with the robbery of the US Bank, 14837 Pomerado Road in Poway inside of the Albertsons Grocery Store.

The unknown male dubbed the “Geezer Bandit” used a demand note to rob one of the tellers at the bank. In addition to presenting the demand note, he pointed a small caliber revolver at the teller and threatened to use the weapon against her. After receiving a sum of money he walked out of the north exit door of the grocery store.

Witnesses have described him as a white male, age 60 to 70 years old, 6’0” tall,190 lbs. with an average build. He was last seen wearing a navy colored blazer, navy or black colored baseball cap, and dark colored pants