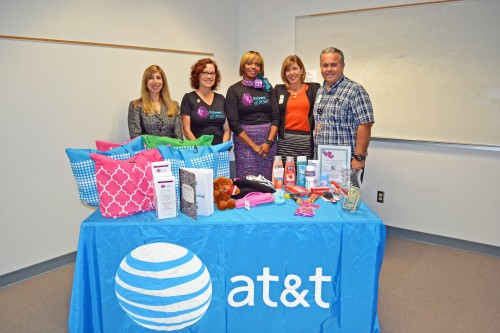 SAN DIEGO–District Attorney Bonnie Dumanis said today that her office and the San Diego Human Trafficking Task Force (HTTF) received dozens of resource bags from the local nonprofit organization The Women of AT&T, Paradise Chapter, to be given to human trafficking victims rescued by the Task Force.

These resource bags contain personal items such as toiletries, clothing, food, journals with written messages of respect and hope, as well as other necessities.

“This is a great example of the kind of public/private partnerships that make San Diego special,” said District Attorney Dumanis. “Law enforcement is so appreciative of the AT&T employees who’ve come together to support victims of human trafficking and help raise awareness of this increasing crime affecting too many young women and girls in our community.”

Founded in 2012, the Women of AT&T, Paradise Chapter, is a group that mentors and gives back to the local community and volunteers with major charitable causes. The group began a community service program for Project L.I.F.E. in 2014, where they assemble and donate resource bags for distribution to human trafficking victims when they’re rescued and begin their rehabilitation process. The bags are created with the support from donations. The group hopes to donate 100 bags this year.

“The Women of AT&T, Paradise Chapter, is committed to aiding the victims of human sex trafficking through our Project L.I.F.E. (Living In Freedom From Exploitation) by volunteering our time and gathering items to build and donate resource bags to individuals in need in our community,” said Tammi Terrell, executive advisor to the board of The Women of AT&T, Paradise Chapter and vice president and general manager, Southwest and Hawaii. “One of our missions is to connect and inspire our members to achieve their personal and professional goals and to effect change in the community. We hope our efforts for Project L.I.F.E. make a difference to many and provide a good start to help with the healing process.”

The HTTF was formed in January 2015 and is a cooperative effort including 15 different local, state and federal law enforcement and prosecution agencies and maintains a victim-centered approach. The HTTF utilizes the model advanced by the U.S. and California Department of Justice to successfully combat human trafficking through the 4 P’s; Prevention, Protection, Prosecution and Partnerships.

The mission of the HTTF is to disrupt and dismantle human trafficking and child exploitation organizations through a comprehensive, collaborative and regional law enforcement and prosecution response, in order to identify and rescue victims and hold their offenders accountable; along with promoting community awareness, expanding the exchange of information, and enhancing law enforcement resources and training.