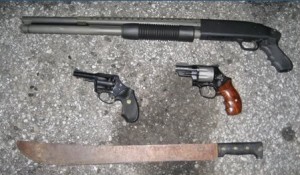 “These defendants were the leaders of MS-13, a national gang known for its gratuitous murders,” said U.S. Attorney Sally Quillian Yates. “They spread fear throughout the community by killing suspected rival gang members and innocents who crossed their path. While Atlanta has generally not experienced the same level of violent gang activity as some other large cities, as this case demonstrates, we are not immune.”

“The defendants in this case indiscriminately brought murderous violence against rival gang members and innocent civilians alike,” said Brock D. Nicholson, special agent in charge of HSI Atlanta. “HSI is proud to continue to partner with the FBI and the U.S. Attorney’s Office to target violent transnational gang members who threaten the safety of Atlanta communities.”

“Removing these violent gang members from the streets of metro Atlanta not only makes for a safer community but further weakens the Southeastern U.S. roots of this international criminal enterprise known as MS-13. The FBI will continue to work with its various law enforcement partners in targeting this group, and others like them, in a unified and effective manner,” said Mark F. Giuliano, special agent in charge of the FBI Atlanta Field Office.

According to information presented in court, MS-13 is an international gang that has operated in the Atlanta area since at least 2005. During the course of this investigation, which ended in 2010, more than 75 MS-13 members have been arrested, charged, and/or deported. MS-13 members were organized into “cliques,” or groups, but they operated under the larger umbrella of MS-13. Each clique had a leader, usually referred to as “the first word,” who conducted weekly meetings. At these meetings, members discussed their crimes against rival gang members and their plans to retaliate against their rivals. The clique leader collected dues from the gang members. The leaders used the money to buy guns and post bail for jailed members. Some of the money was sent back to the MS-13 leaders in El Salvador and Honduras. Clique leaders communicated with MS-13 leaders in their home countries to update them on gang activities in the Atlanta area. The gang members staked out Gwinnett and DeKalb Counties as their home territory, where they committed murders and attempted murders and armed robberies. They also sold cocaine as part of their gang activity. The evidence presented at trial demonstrated that the defendants committed the following crimes: