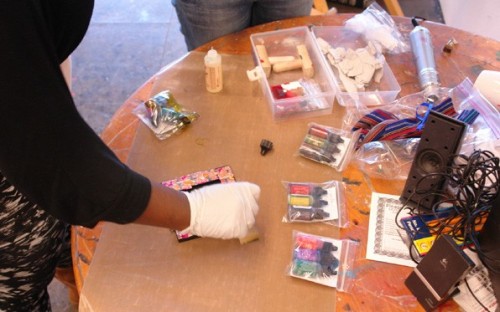 SAN DIEGO–Initially, the teenage faces look a little impassive when told about the art project they are going to undertake that afternoon: metal embossed frames which can hold a mirror or a photograph. But the appearance is misleading, because soon enough they are selecting a design and watching attentively as a volunteer teaching artist explains what they’ll need to do.

“It’s kind of like therapy,” said Monica, 16, a student at Reflections School in La Mesa, as she works on her frame. “I’ve been here a couple of times. It’s relaxing and it’s quieter than the classroom.”

The teenagers have all been ordered by courts to attend Reflections, run by County Probation and the County Office of Education. Some of the students have committed serious felonies. All of them have emotional issues such as anger problems or inability to deal with stress. The dozen or so kids in this group were selected to participate based on good behavior and interest in arts.

Every Thursday, Correctional Deputy Probation Officer Janine “J” Tolan takes a group of kids on a field trip to A Reason to Survive (ARTS) studio in National City where they work in various media such as paints, mosaics, ceramics and pottery. They create projects such as papier mache skulls, memory books, domino and shrink art jewelry, woven paper greeting cards and a conservation-themed mural for Mary Lanyon Fay Elementary School.

ARTS is an organization that believes in the therapeutic powers of arts education to help people facing adversity positively transform their lives. The teaching artists are not clinical art therapists but people like Linda Wells, who love the arts themselves.

Every week is different, said Wells, who worked for many years as a high school counselor. She comes up with a project that can be completed in a day and then she donates all the materials. In the frame project, students have to choose an embossing design, measure metal pieces and carpet tape and problem solve with glue to make it all fit together, she said.

“My goal is to get them working with their hands and to stretch their creativity and try to do things they’ve never done before,” said Wells. “They’re very creative and most of them don’t think so. I want them to help each other (with their projects). I want them to feel like this is a family.”

“You never know what will touch someone’s heart or motivate them,” said Tolan, who has managed the program for Reflections for the last four years. Some of the students who take part in the program used to have a truancy problem or would act out. But they have changed since this program is a reward for good behavior.

Wells said the students also have an opportunity to meet and interact with other kids their age who aren’t on probation but who just like to do art for fun.

Kristy, 17, said she is mostly interested in the performing arts but she also likes crafts and appreciates the program.

“I really like this class because it shows me I can use anything to make art. I have a big imagination but would never think of using (these materials),” said Kristy.

Tolan said some of the kids will fuss sometimes and say they can’t do the project, but at the end of the day, she believes they are proud of what they make because “you can’t take it away from them.”

Monica said not everyone at their school is exposed to this kind of art in their everyday lives.

“This is something you can take home and give it to your mom. Because, moms are weird and they like whatever you make,” she said with a shrug and smile.