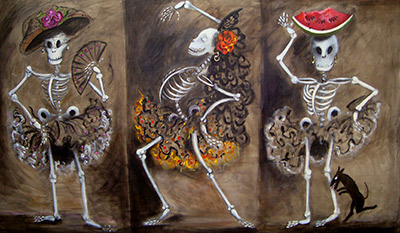 ESCONDIDO– One of Mexico’s most celebrated photographers, Mario Castillo, will return to the California Center for the Arts, Escondido (the Center) Museum this fall in a new exhibition that commemorates the festive and reflective Mexican holiday of Día de los Muertos.

“Los Colores de la Muerte: A Day of the Dead Festival” will open Nov. 1, the first day of the annual festivities during which family and friends gather to honor and celebrate the lives of those who have passed. The exhibition will run one month only, concluding on Dec. 1.

With a Spanish title that means “The Colors of Death,” the new exhibition will, in fact, be very colorful and a true feast for the eyes. Vibrant paintings and photographs as well as ornate, white clay sculptures of Catrinas– costumed skeleton figures that have become a prominent part of modern Day of the Dead observances– will pop against the dark purple and burnt-orange walls of the galleries.

Gallery 1 will feature the work of Mario Castillo, whose photographs were previously on display at the Center Museum last fall in the show “Heart & Soul of Mexico.” Castillo’s Day of the Dead exhibit, titled “Polvo Eres,” will include 35 of his photographs, depicting different tombs from cemeteries in Mexico.

Castillo was born in Ocotlán, Jalisco, Mexico in 1953. A self-taught photographer, his work has focused on the ethnic groups of Mexico. Castillo was awarded a scholarship from the State Fund for Arts and Culture in 2000 and is a recipient of multiple prizes and acknowledgements across Mexico and the United States. He has exhibited in the Italo-Latinamerican Institute in Rome, Italy; in Beijing, China; at the Centro Cultural de la Raza in San Diego; at the Cultural Center El Agora in Mexico City; and at the Tijuana Cultural Center.

Gallery 2, the largest of the museum’s spaces at 3,600 square feet, will feature 15 paintings on canvas of Catrinas, all created by Paris-based artist Cristina Rubalcava, who was introduced to the Center by the Mexican Consulate in San Diego. The consulate is helping the Center bring Rubalcava’s works from the Mexican Embassy in Paris to Escondido.

Born in Mexico City in December 1943, Rubalcava showed a great interest for drawing and painting from an early age. In 1970, the San Ángel native moved to Paris where she set up her studio. Her work has been exhibited numerous times in Europe, Asia, Latin America and the U.S. and is part of important permanent collections in institutions such as the Paris Modern Art Museum, Tamayo Museum (Mexico City), MARCO (Monterrey Mexico), the Basilica de Guadalupe Art Collection (Mexico City) and Fundacion Ralli (Punta del Este). In 2005, Rubalcava finished an important mural, “Virgen de Guadalupe,” at the Museo de la Basilica de Guadalupe to add to the series of public works she has made throughout Mexico City and Paris.

In addition, the Center is partnering with Universidad de Tijuana CUT to display an altar in Gallery 2. Two architects, Rodolfo Ortiz Guerrero and Gloria A. Morales Mendívil, from the university’s Department of Architecture agreed to install an altar that will have as its main theme the anniversary of the artist José Guadalupe Posada, the Mexican printmaker, cartoon illustrator and political satirist whose work left an indelible mark on Mexican pop culture and folk art. His prints of skulls and skeletons have strongly influenced Day of the Dead imagery, even inspiring the Catrinas that are now icons of the holiday.

The Center is also partnering with Tijuana’s cultural center, CECUT (Centro Cultural Tijuana), which is generously taking care of all the printing needs for the exhibit.

“Los Colores de la Muerte: A Day of the Dead Festival” is curated by Lisette Atala-Doocy, whose passion for the arts goes back to her childhood and adolescence in Mexico and Europe. A Mexico City native, Atala-Doocy has a Bachelor of Arts degree from the Mexico City Conservatory of Music and studied music theory at the London Academy of Music. Francisco Godinez Estrada, who is in charge of galleries at IMAC, is designing the exhibition.

The opening of “Los Colores de la Muerte” will be strengthened by two other Day of the Dead events happening on the Center’s campus.

The Center will once again host its free Día de los Muertos festival from 6 to 9 p.m. that Friday. First presented in 1995, this community celebration is an annual tradition at the Center. Community members are invited to participate by creating their own memorial in remembrance of loved ones while enjoying live music, entertainment, crafts, face painting and traditional Mexican fare. The 18th annual event is generously sponsored by Crescentera Foundation.

In addition, the Center and Ballet Folklorico Tierra Caliente (BFTC) have teamed up to produce “Mexico…Vive su Folklor,” an artistic overview of the history of Mexico on stage. In the Concert Hall at 7 p.m. on Nov. 1, the BFTC dance company will be performing an exciting dance repertoire incorporating music, costumes and choreographies in interpretation of Mexican regional dances.

California Center for the Arts, Escondido is located at 340 N. Escondido Blvd. in Escondido.