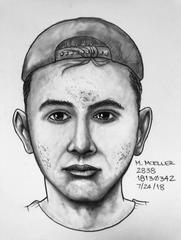 SAN MARCOS–San Marcos Sheriff’s Deputy investigators are asking the public’s help in identifying and locating a suspect who robbed a man while he was sitting in his car.

It happened on June 12 just before 8 p.m. in the Buffalo Wild Wings parking lot located in the 1000 block of West San Marcos Blvd.

The victim, who was sitting in his own car, says a light colored Nissan Versa parked right behind him. The suspect exited the Versa, approached the victim’s car and opened the driver’s side door. He says the suspect pulled out a keyhole saw, placed it on the victim’s neck and demanded his iPhone.

The suspect took the victim’s iPhone and threatened to hurt the victim before he left the area.

He’s described as a white or Hispanic man between 21 to 25-years-old, standing around 5’9″ to 6′ tall with a thin build. He weighs between 160 and 170 pounds with short wavy hair and dark eyes. The suspect was clean shaven. He had severe acne on his face.

If you recognize this man, call the Crime Stoppers anonymous tip line at (888) 580-8477. Crime Stoppers is offering up to a $1,000 reward to anyone with information that leads to an arrest in this case.

Visit the Crime Stoppers website at www.sdcrimestoppers.org for more information on how to send anonymous web and mobile app tips.